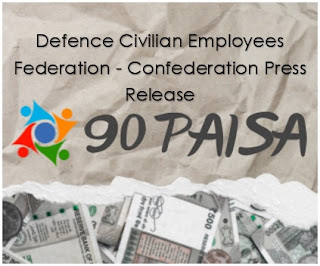 As you are aware, the Defence Civilian employees and workers are on the path of struggle since the day the Govt. of India decided to corporatise the 41 ordnance factories, virtually to  hand  over the national assets to private entrepreneurs that too to a selected favoured few of the ruling Party, BJP.  Ever since this Government came to power, as part of the intensification of the neo- liberal economic policies, the Government had been making all out efforts to change the public secto

r ownership of defence production units.  The Government could not fault the Ordnance Factory Board either on the score of the quality of their products or the cost of production.  Recently when the country was in the grip of covid 19 and the universal wearing of masks became a combating pre-requisite, the Government had to seek the help of OFB to produce these masks in large quantities and at affordable price.

The Ordnance factories came into existence as part of the National endeavour to bring in self reliance in the vital defence sector emanating from the bitter experience when the country was in war with its neighbours.  The present decision on all fours is the product of the crony capitalism indulged in by the rulers ever since they came to power.  They are duty bound to do so having received financnail assistance from them.

The Industrial Disputes Act and other labour welfare enactments made by the country in its post independent era aim to protect the interest of the workers and their right to strike.  It must be stated in all seriousness that despite differences, all Federations including that led by the leaders of the Ruling party joined together to resist this ill -conceived  project of the government.  Even after the commencement of the strike on the last occasion they decided to provide an opportunity to the Government to come to a mutually agreeable negotiated settlement and created an ambience required for it by withdrawing the strike action.  It is, therefore, audacious to note that the Government has taken the unfortunate position that it is their sole prerogative to take policy decisions and  those decisions are un-negotiable. The Government took no steps to allay the fears expressed by the workers in the event of the transformation of the entity into a corporate body.

It is the united strength of  workers, that forced the Government to invoke the provisions of the dreaded Essential Services Maintenance Act which shall provide draconian powers to the Government to suppress the movement, jail the leaders, oust them permanently from the factories through arbitrary dismissals and removals.

The Federations in the Defence Industry have come together and passed a resolution, which inter alia details the inexplicable move of the government and their determined decision to face it squarely.  Copy of the said resolution is enclosed.

The invoking of the provisions of the ESMA to deal with a purely industrial dispute must be viewed seriously. It reflects the impudent and autocratic attitude of the rulers.    Confederation of Central Government employees and workers and its affiliates had been the victim of such autocratic and despotic actions of the Government in the past.  It is our solemn duty to extend our solidarity and support to the Defence workers at this critical juncture.  The Defence Federations have called upon their members to observe 8th July, 2021 as Black Protest day.  Confederation’s National Sectt. calls upon its affiliates and through them all the Central Government employees to join the protest action on 8th July, 2021 and demonstrate their solidarity with the Defence workers.

Secretary General.RESOLUTION ADOPTED IN THE JOINT MEETING OF THE 5 FEDERATIONS OF THE DEFENCE CIVILIAN EMPLOYEES (AIDEF, INDWF, BPMS, NPDEF & AIBDEF) CONDEMNING THE DRACONIAN ESSENTIAL DEFENCE SERVICES ORDINANCE 2021 AND DEMANDING TO WITHDRAW THE SAME!

A Joint Meeting of the 5 Federations of the Defence Civilian Employees (AIDEF, INDWF, BPMS, NPDEF & AIBDEF) held on 1-7-2021 through video conference has unanimously resolved to condemn the most draconian Essential Defence Services Ordinance 2021 promulgated by the Government of India. It is most unfortunate to note the manner in which the Government of India is treating its committed and devoted workforce by snatching away the legal right of the Defence workers under the provisions of the Trade Union Act 1926 and Industrial Dispute Act 1947.

The draconian Ordinance has hurt the feelings of the Defence Civilian Employees since they have not resorted to any strike when the country was in need. Rather they have worked day and night without even going to their home for weeks together to fully equip the Armed Forces in all the wars the country has faced after independence including the Kargil war. Even in 2019 when the govt. took the arbitrary decision to Corporatise the Ordnance Factories, in the midst of one month strike, the Federations after considering the tense situation in the China Border has withdrawn the strike after 5 days.

Even during the Covid-19 pandemic lockdown and curfew period, it is the employees of the Ordnance Factories who worked day and night risking their lives for producing PPEs and sanitisers required for the front line warriors. The workforce of the Ordnance Factories who always channelize their entire resources to equip the Armed Forces with the most modern weapons, equipment and troop comfort items doesn’t deserve such treatment from the Govt.

The Federations of the Defence civilian employees has decided to exercise this last tool of protest in an unavoidable situation since the Government of India has arbitrarily taken the decision to splinter the 41 Ordnance Factories into 7 non-viable corporations which are going to result in its closure in the coming days since Government has decided not to provide workload to these Ordnance Factories on the basis of nomination.

The arbitrary and biased decision of the Government takes away the rights and status of the Defence civilian employees who were recruited as Central Government Employees / Defence Civilian Employees under Article 309 of the Constitution of India and being paid from the consolidated fund of India. The Government failed to neither enter into a negotiated settlement with the Federations nor to refer the dispute for adjudication under the ID Act 1947 in spite of the failure report submitted by the CLC a fortnight before.

The joint meeting of the 5Federations condemns the various draconian provisions given in the Ordinance such as the dismissal of the employees without holding any inquiry, to arrest the employees who called the strike, participate in the strike and punishing with imprisonment up to 2 years. Fearing these draconian provisions the 76,000 employees will not surrender their demand to withdraw the Government decision of corporatisation and also to maintain the status of the employees as Central Government Employees / Defence Civilian Employees who were recruited under Article 309 of the Indian Constitution and the right to receive salary and all benefits from the consolidated fund of India.

The democratic and legal protest against the state authority misusing the state power against its own employees will continue. The draconian steps taken by the Government to suppress and crush the democratic rights of the Defence Civilian Employees are retrograde, undemocratic, and worker and is totally unacceptable to the Trade Unions and the entire workforce of the Defence Industry.

The joint meeting of the 5 Federations urges upon the Government of India to withdraw the draconian and colonial EDSO and instead of threatening and crushing its own employees should come forward to start immediate negotiations with the recognised Federations so as to ensure that the 220 years old pioneer Defence Industry viz Ordnance Factories and its employees are protected and saved. The joint meeting of the 5 Federations calls upon the Defence Civilian employees to remain united and fight back against all these retrograde actions of the Government.

The joint meeting also appeals to all the patriotic citizens of the country, all the Trade Unions, political parties, social service organisations to join hands with the Defence civilian employees in their struggle to save the most strategic Defence Industries from closure and sale and also in their struggle to save and protect the democratic and legal right of the strike. It is proven time and again that genuine grievances of the working class cannot be strangulated through draconian laws and police raj.