May 27, 2020
Clarifications in respect of prescribed electronic modes under section 269SU of the Income-tax Act 1961 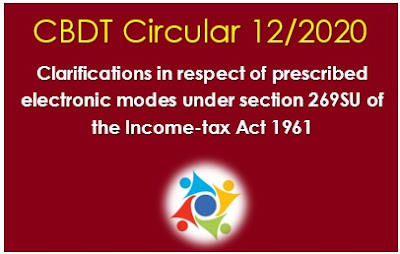 Circular No. 12/2020
F.No.370142/35/2019-TPL
Government of India
Ministry of Finance
Department of Revenue
Central Board of Direct Taxes
Dated: 20th May, 2020
Subject: Clarifications in respect of prescribed electronic modes under section 269SU of the Income-tax Act 1961 – reg.
In furtherance to the declared policy objective of the Government to encourage digital transactions and move towards a less-cash economy, a new provision namely Section 269SU was inserted in the Income-tax Act, 1961 (“the Act”), vide the Finance (No. 2) Act 2019. This section requires every person carrying on business and having sales/turnover/gross receipts from business of more than Rs 50 Crores (“specified person’) in the immediately preceding previous year to mandatorily provide facilities for accepting payments through prescribed electronic modes. Subsequently vide notification no. 105/2019 dated 30.12.2019 (i) Debit Card powered by RuPay; (ii) Unified Payments Interface (UPI) (BHIM-UP]); and (iii) Unified Payments Interface Quick Response Code (UPI QR Code) (BHIM-UPI QR Code) were notified as prescribed electronic modes.
2. Representations have been received stating that the above requirement of mandatory facility for payments through the prescribed electronic modes is generally applicable in B2C (Business to Consumer) businesses, which directly deal with retail customers. Moreover, since the prescribed electronic modes have a maximum payment limit per transaction or per day they are not so relevant to B2B (Business to Business) businesses, which generally receive large payments through other electronic modes of payment such as NEFT or RTGS. Mandating such businesses to provide the facility for accepting payments through prescribed electronic modes would cause administrative inconvenience and impose additional costs.
3. In view of the above, it is hereby clarificd that the provisions of section 269SU of the Act shall not be applicable to a specified person having only B2B transactions (i.e. no transaction with retail customer/consumer) if at least 95% of aggregate of all amounts received during the previous year, including amount received for sales, turnover or gross receipts, are by modes other than cash.
sd/-
(Ankur Goyal)
Under Secretary to the Govt. of India
Click to view the CBDT Circular No. 12/2020