The meeting of the 7 CPC National Anomaly Committee was held today (17/7/2018). Shri Chandramoul i, Secretary (P), DOPT presided over this meeting. The Department of personnel had identified the following six items only for discussion:

I. Item No. 3- Removal of condition of 3% stipulated to grant bunching benefit

3. ltme No. 5- Removal of Anomaly in Pay Matrix

4. Item No. 8- Lesser Pay in higher level of Pay Matrix

5. Item No. 9 ~ Bunching of steps in the revised pay structure

6. Item No. 14 – Grant of GP 5400 to Sr Section Officer of Railways and AAOs of IA&AD and Organised Accou:1ts (Civil Accounts, Postal Accounts and Defence Accounts)

The above items were subjected to discussions and the fo llowing decisions were taken.

Item No 3 – The Govt. will consider as to how the matter could be resolved after assessing financial implications

Item No. 4 – The suggestion of the Staff Side to fix the pay on promotion at the next higher stage after granting one increment was not accepted. After discussion it was agreed that Govt would address the issue on case by case basis. Those who are covered by the anomaly described under this item have been advised to make representation to Fin. Ministry directly. The staff side however insisted that the entire anomaly would he resolved if two increments are granted while on promotion/MACP.

Item No. 5 & 8 – it was agreed by the official side that this is an aberration ·and shall be addressed.

Item No 9- Rejected by official side

Item No 14 – The matter is under consideration of the Govt…….

Complete Detail is given below…

After discussion on the above items, the official side informed that the DOPT had already examined those issues and have come to the conclusion that those items will not come under the ambit of the definition of Anomaly. The Staff Side contested this. It was decided that the DOPT will convey the reasoning to the staff side and hold meeting with the Staff Side to sort out the differences.

The following items has been referred to Departmental Anomaly Committee of the respective Department/Ministries.


Item No.15. Technical Supervisors of Railways

Item No.16 Anomaly in the assignment of replacement of Levels of pay in the Ministry of Defence, Railways, Mines etc in the case of Store Keepers

Item No.17 Anomaly in the assignment of pay Levels in the case of Research Assistants in Ministry of AYUSH, Homoeopathic Department.

The staff side then raised the following other issues.

1. Central Govt employees may be granted one more option to switch over to 7 CPC from a date subsequent to 25th of July 2016 — the official side informed that the matter is under consideration and a decision would be taken shortly.

2. The issue of pay fixation of ex-servicemen in the last pay drawn by them before retirement from armed forces is remitting unsettled — the official side informed that the matter has been referred to Min. of Defence by DOPT for their comments. Decision would be taken after receipt of comments from MOD.

3. The Staff side raised the issue of not convening meetings of the National Council, JCM and Standing Committee.

4. The staff Side also informed of the decision taken by the NJCA in its meeting held on 3-7-2018 of the revival of the deferred indefinite strike by the Central Govt Employees if no settlement is brought about on major demands like upward revision of minimum pay, fitment factor and NPS before 7-8-2018. 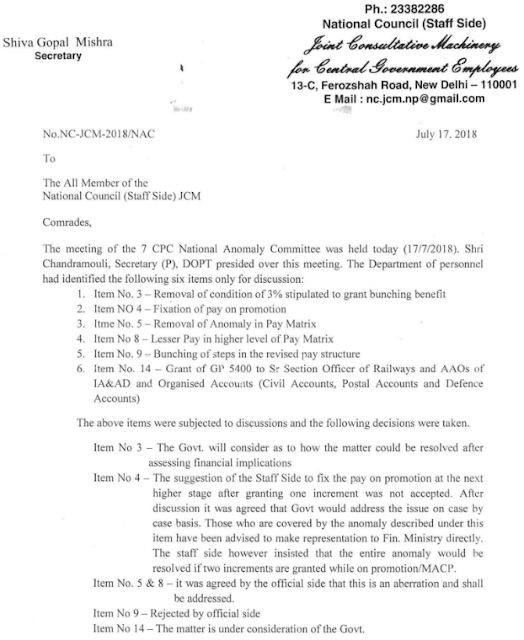 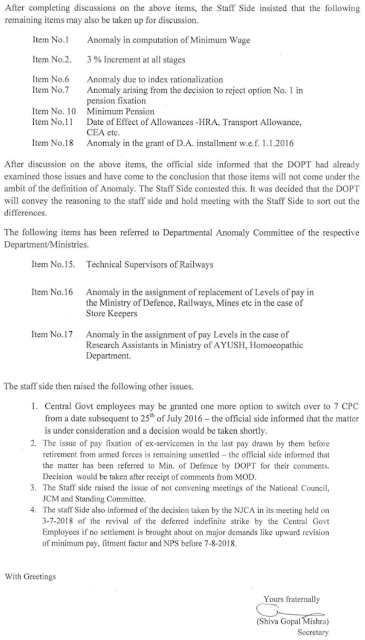