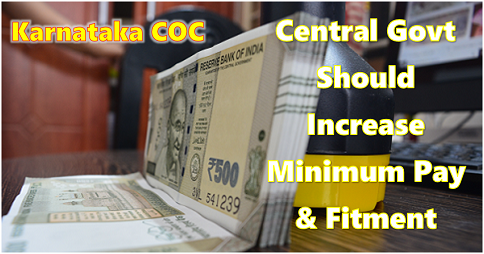 Comrades,
Today none of the 7th CPC related demands of Central Government Employees are settled. The assurance given by the Group of Ministers to the NJCA leaders regarding increase in Minimum Pay and Fitment formula is in paper even after a lapse of 20 months. Now the Finance Minister has replied in Parliament that “no change in Minimum Pay and Fitment formula is at present under consideration”.

Pay Commission Objective: It is the endeavour of every pay commission to ensure that the pay and allowances of employees should be ‘fair and reasonable’. The pay structure should also motivate the employees to reasonable levels of performance in the tasks assigned to them, so that the general public derive the benefit of their service as intended.

Our demand of revision of Minimum Pay and Fitment formula is quite justified. 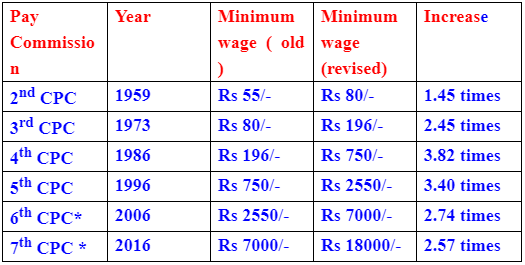 Comparative picture of pay of Central Government and State Government in regards to minimum wage as on 1.7.2017 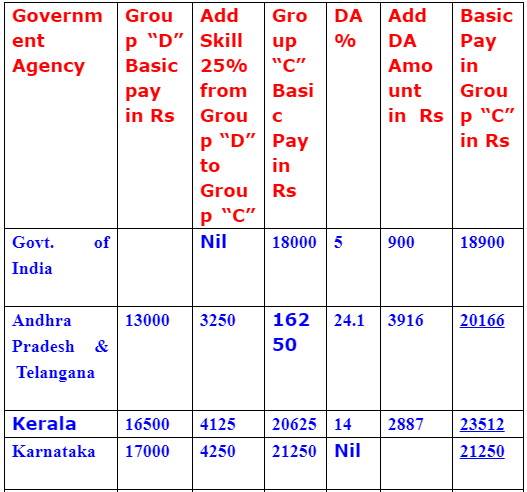 The financial position of the Central Government is very good. Even the GDP (Gross Domestic Product) has shown increase in last few years which is around 7% , the Indian economy is fastest growing and placed 7th in the world ( which is at 2,250.987 billions of $ ), comparing to wages paid in the world our wages are at lower level. The Government fiscal budget deficit equal to 3.50 percent of the country’s Gross Domestic Product in 2016. Compared to 2008 where the fiscal deficit was at 7.8 %, but today the fiscal deficit is contained at 3.5%. This is also a healthy sign of the economic status of the Central Government financial status, the budget fiscal deficit is always below 4%.
Direct tax collections in 2017-18 at Rs 9.95 lakh crore, exceeded the revised budgetary target of Rs 9.8 lakh crore. Also, 6.84 crore income tax returns filed in the year against 5.43 crore in the previous year signalling a rise of 26 % . A net of 99.5 lakh new assesses were added to the tax net.

Net collection from corporate tax went up 17.1 per cent while that from personal income tax rose 18.9 %.

With the improved economic climate, introduction of e-way bill and improved GST compliance, GST collections would continue to show a positive trend.

The wage bill of the Central Government on in its employees is less than 10% or 3.4% of the GDP, which is less compared to various countries world wide . 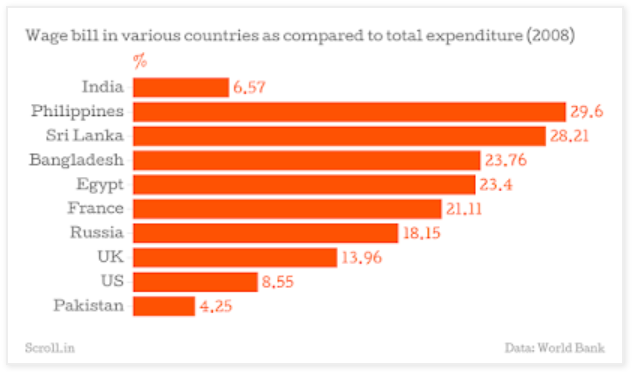 Unknown said…
most of the working class in India are suffering due to non improvement in their standards of living because of not proper increase in their Pay Scales and Allowances. For example, Public Sector Banks. Their Officers and Employees are going on LOSS OF PAY STRIKES to reveal that sincere and hard work is not properly paid. All political parties are using all the Public Sector Banks in several forms, in the name of uplifting their VOTE BANK. But, so far, they seldom care for the officers and employees of the Public Sector Banks. Eventhough the Operating Profits of all PSBs are increasing, healthy working conditions, beter pay scales and allowances have not been given to these in the last 10th wage settlement. NOW, W.E.F. 01.11.2017, 11th wage revision's discussions are going on. why the Pillai Committee recommendations have so far been shelved ? why the NDA / BJP which conducted two important GYAN SANGAMS on BANKING SECTOR, could not so far, even after those 48 months' powerful and productive ruling the country, could not so far bring betterment in the lives of all staff of these vital Public Sector Banks ? Country needs to know the TRUTH. JUST THE TRUTH .. answer please...
May 29, 2018 at 7:21 PM