"It was assured that no employees will be retrenched and no factory will be closed." 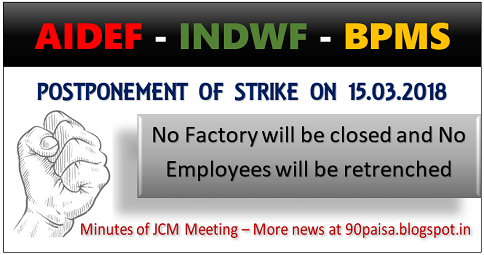 Dear Affiliates
Joint memorandum submitted by Three recognised Federations and INDWF Circular No. INDWF/Circular/002/2018 dated 19.02.2018 for holding oal attention Strike on 15.03.2018 alongwith demands were discussed in a meeting by MoD convened under the Chairmanship of JS (Army) on 09.03.2018 at New Delhi. All the issues were discussed and it was agreed by MoD.

1. Reduction made in the expenditure budget of approximate Rs.3000 Crores is likely to be restored.

2. It was assured that no factory will be closed and no employees will be retrenched.

3. Efforts will be made not to dislocate the employees from their existing factories/place of postings.

4. In case, after the stipulated period the Army do not place indent for existing itmes, then appropriate training of staff for re-deployment would be considered.

5. Items which are included in the Uniform allowance are being examined and will be clarified, and the case is under process for releasing the indents for the next financial year for the allotted workload.

6. JS (LS) also stated that VFJ is loaded with manufacturing of Mine Protected Vehicle (MPV) and Federation was assured about the future work load of Small Arms Factories.

7. No employee will be retrenched in Army and the effect of GOCO model on employees of Army Base Workshops (ABWs) and the manpower requirement of MES would be considered. All efforts will be made do not dislocate the employees from their existing Workshops, Depots and MES.

8. Necessary instructions will be issued for holding DPCs and effecting promotions in DGQA.

9. It was assured that no employees will be retrenched and no factory will be closed.

At the affiliated unions are directed to conduct the Gale meeting on 15.03.2018 during the mustering in time and declare the decisions to all the employees not to proceed with the agitation already declared till further instructions are issued for communication. The Federation will monitor these decisions with MoD for adopting/implementing the decisions. Unions may communicate to all the employees accordingly, further discussion will take place in the Working committee Meeting to be held at Medak on 6th and 7th April, 2018.

Yours Sincerely,
(R. SRINIVASAN)
General Secretary
Minutes of JCM Meeting with Chairmanship of JS(Army) on 9.3.2018 - INDWF