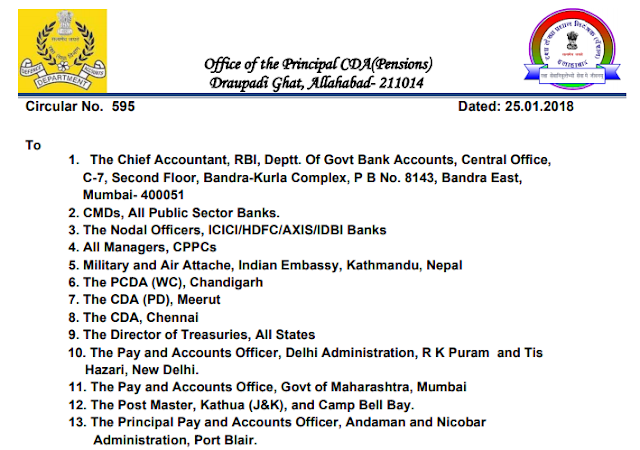 Reference is invited to this office Circulars mentioned above under which implementation instruction regarding new PPO series and e-PPO series have been issued.

2. The procedure of forwarding of e-PPO in respect of Commissioned Officers of Armed Forces has been provided at Para 4(b) of circular No. 588 dated 20.10.2017. The issue has been re-examined in light of the representations from the pensioner regarding non payment of pensionary award due to non receipt of confirmation from Army HQrs. The matter is under consideration with higher authorities. It has also come to the notice of this offce that in some of the cases documents submitted to PDAs are incomplete/not in order. In view of this and till the finalisation of the matter of confirmation of e-PPO (in case of ICOs) from Army HQrs, PDAs are requested to follow the procedure of physical presence for first payment of pension as mentioned at para (4) of Circular No.546 dated 10.09.2015 which states that “Pensioner will be required to be called to the paying branch / DPDOs if the underbraking /documents submitted by Service HQrs in the case of ICOs (through PSA) is incomplete”.

3. In addition to this, those  pensioners who present themselves before PDA as per old practice along with copy of e-PPO for verification of identity etc. the first payment of pensionary award may be made without waiting for confirmation from Army HQrs for such pensioners.

4. It is also noticed that PDAs are insisting for the confirmation from Army HQrs in Corrigendum PPOs also whereas the provision made in this office Circular No. 588 dated 20.10.2017 is for first payment in case of fresh retiree only but not in the case where pensioner is already drawing his/her regular pension from PDA concerned.

5. All other instructions will remain unchanged.