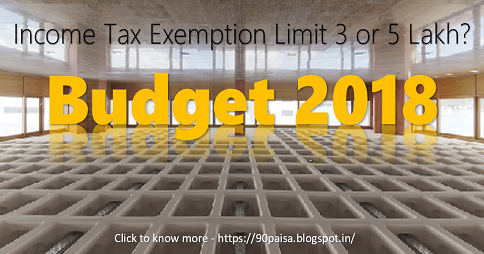 According to information available, the annual budget, to be presented by Finance Minister Arun Jaitley on February 1, could have some sops for the middle-class families.

Post the Seventh Pay Commission, most government servants now find themselves within the tax slab. For a number of years now, government servants have been demanding that the tax-exemption slab be raised to Rs. 5 lakhs. The current exemption stands at Rs. 2.5 lakhs. There is a five percent tax on the income in the Rs. 2.5 lakhs to 5 lakhs bracket.

There are prevalent talks that the government could revise the slabs. This could come as a big boon for middle income groups, especially the salaried class who are suffering due to acute inflation. No changes were made in the tax slab last year, but the tax of 10 percent on the Rs. 2.5 lakhs to 5 lakhs slab was brought down to five percent.

The budget, to be presented next month, is expected to reduce the tax on the Rs. 5 lakhs to Rs. 10 lakhs slab to 10 percent (it currently stands at 20 percent). This could spell huge relief to the salaried class.

Similarly, the tax on the Rs. 10 lakhs to Rs. 20 lakhs slab could be reduced to 20 percent (currently stands at 30 percent). A tax of 30 percent is collected on the amount exceeding Rs. 20 lakhs. Tax rate on this slab is the lowest in India when compared to most other countries.

The income tax department could raise the tax slab in order to provide relief to the salaried class that continues to suffer from the rise in prices of essential commodities due to inflation.

There are, however, some unconfirmed reports that claim that the tax slab is not likely to be raised to Rs. 5 lakhs.

Rates of tax for every individual, resident in India, who is of the age of sixty years or

more but less than eighty years at any time during the financial year:

In case of every individual being a resident in India, who is of the age of eighty years

or more at any time during the financial year: