Sub: Brief of the meeting held today with the Cabinet Secretary (Government of India)

The Cabinet Secretary said that, he is aware of the problems of the Staff Side(JCM) raised by them from time to time and particularly to this issue and will definitely try to resolve them

Particularly on the issue of National Pension System(NPS) he said that the issue active consideration of the Government of India and we are trying to find out some solution to the problems arisen because of the NPS.

I also persuaded him to fix-up date of the meeting of the National Council(JCM), to which he said that, the agenda came, and some queries have been raised, which are still to be compiled by the DoP&T. He assured that, he will definitely fix-up the date of the meeting within a short period, and said that, before that, he will ask the Secretary(DoP&T) to hold meeting with the Staff Side.

I told to the Cabinet Secretary that, Central Government Employees are agitated because they feel that VII CPC has not done and justice with them and government is also ready to remove the issues pending before them.

This is for your information. 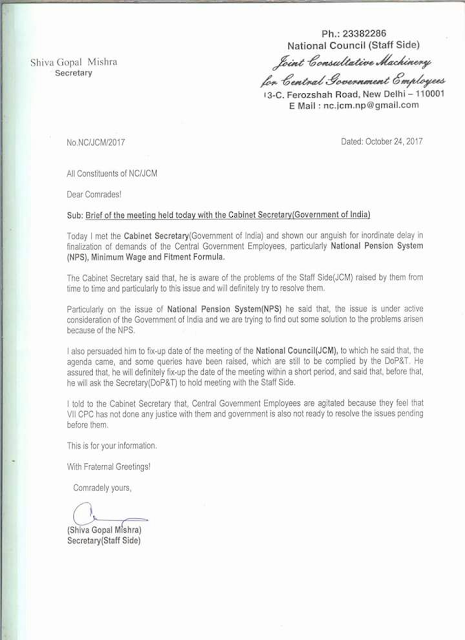