No.19030/1/2017-E.IV
Government of India
Ministry of Finance
Department of Expenditure

Consequent upon the decisions taken by the Government on the recommendations of the Seventh Central Pay Commission relating to Travelling Allowance entitlements to civilian employees of Central Government, President is pleased to decide the revision in the rates of Travelling Allowance as set out in the Annexure to this Office Memorandum.

2. The ‘Pay Level’ for determining the TA/DA entitlement is as indicated in Central Civil Service (Revised Pay) Rules 2016.

3. The term ‘Pay in the Level’ for the purpose of these orders refer to Basic Pay drawn in appropriate Pay level in the Pay Matrix as defined in Rule 3(8) of Central Civil Services (Revised Pay) Rules, 2016 and does not include Non-Practising Allowance (NPA), Military Service Pay (MSP) or any other type of pay like special pay, etc

4. However, if the Travelling Allowance entitlements in terms of the revised entitlements now prescribed result in a lowering of the existing entitlements in the case of any individual, groups or classes of employees, the entitlements, particularly in respect of mode of travel, class of accommodation, etc, shall not be lowered. They will instead continue to be governed by the earlier orders on the subject till such time as they become eligible, in the normal course, for the higher entitlements.

6. It may be noted that no additional funds will be provided on account of revision in TA/DA entitlements. It may therefore be ensured that permission to official travel is given judiciously and restricted only to absolutely essential official requirements.

8. Separate orders will be issued by Ministry of Defence and Ministry of Railways in respect of Armed Forces personnel and Railway employees, respectively.

9. In so far as the persons serving in the Indian Audit & Accounts Department are concerned, these orders issue in consultation with the Comptroller & Auditor General of India

sd/-
(Nirmala Dev)
Deputy Secretary to the Government of India

2. Entitlements for Journeys on Tour or Training

A.(i)  Travel Entitlements within the Country

(ii) It has also been decided to allow the Government officials to travel by Premium Trains/Premium Tatkal Trains/Suvidha Trains, the reimbursement to Premium Tatkal Charges for booking of tickets and the reimbursement of Dynamic/Flexi-fare in Shatabdi/Rajdhani/Duronto Trains while on official tour/training. Reimbursement of Tatkal Seva Charges which has fixed fare, will remain continue to be allowed. Travel entitlement for the journey in Premium/Premium Tatkal/Suvidha/Shatabdi/Rajdhani/Duronto Trains will be as under:-

(iii) The revised Travel entitlements are subject to following:-

(a) In case of places not connected by rail, travel by AC bus for all those entitled to travel by AC II Tier and above by train and by Deluxe/ordinary bus for others is allowed.

(b) In case of road travel between places connected by rail, travel by any means of public transport is allowed provided the total fare does not exceed the train fare by the entitled class.

(ii) For travel between the mainland and the A&N Group of Islands and Lakshadweep Group of Island by ships operated by the Shipping Corporation of India Limited:-

(i) At places where specific rates have been prescribed:- 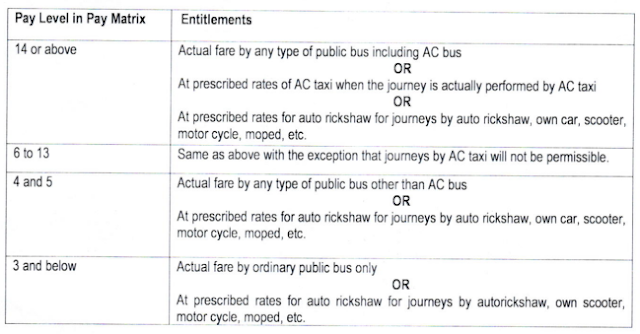 (ii) At places where no specific rates have been prescribed either by the Directorate of Transport of the concerned State or of the neighboring States:

At places where no specific rates have been prescribed, the rate per km will further rise by 25 percent whenever DA increases by 50 percent.

E (i). Daily Allowance on Tour 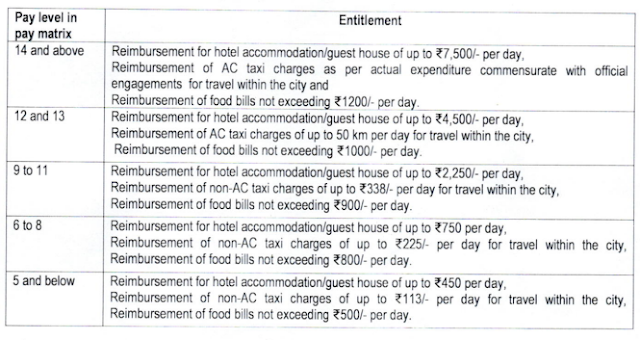 (ii) Reimbursement of Hotel charges:- For levels 8 and below, the amount of claim (up to the ceiling) may be paid without production of vouchers against self-certified claim only. The self-certified claim should clearly indicate the period of stay, name of dwelling, etc. additionally, for stay in Class ‘X’ cities, the ceiling for all employees up to Level 8 would be Rs.1,000 per day, but it will only be in the form of reimbursement upon production of relevant vouchers. The ceiling for reimbursement of hotel charges will further rise by 25 percent whenever DA increases by 50 persent.

(iii) Reimbursement of Travelling charges:- Similar to Reimbursement of staying accommodation charges, for level 8 and below, the claim (up to the ceiling) may be paid without production of vouchers against self-certified claim only. The self-certified claim should clearly indicate the period of travel, vehicle number, etc. the ceiling for levels 11 and below will further rise by 25 percent whenever DA increases by 50 percent. For journeys on foot, an allowance of Rs.12/- per kilometre travelled on foot shall be payable additionally. This rate will further increase by 25% whenever DA increases by 50%.

(iv) Reimbursement of Food charges:- There will be no separate reimbursement of food bills. Instead, the lump sum amount payable will be as per Table E(i) above and, depending on the length of absence from headquarters, would be regulated as per Table (v) below. Since the concept of reimbursement has been done away with, no vouchers will be required. This methodology is in line with that followed by Indian Railways at present (with suitable enhancement of rates). i.e. Lump sum amount payable. The lump sum amount will increase by 25 percent whenever DA increase by 50 percent.

Absence from Head Quarter will be reckoned from midnight to midnight and will be calculated on a per day basis.

(vi) In case of stay/journey on Government ships, boats etc. or journey to remote places on foot/mules etc for scientific/data collection purposes in organization like FSI, Survey of India, GSI etc., daily allowance will be paid at rate equivalent to that provided for reimbursement of food bill. However, in this case, the amount will be sanctioned irrespective of the actual expenditure incurred on this account with the approval of the Head of Department/controlling officer.

Note: DA rates for foreign travel will be regulated as prescribed by Ministry of External Affairs.

(i) Travel Entitlements:
(a)    Travel entitlements as prescribed for tour in Para 2 above, except for International Travel, will be applicable in case of journeys on transfer. The general conditions of admissibility prescribed in S.R.114 will, however, continue to be applicable.

(b) In cases of transfer to stations which are at a distance of less than 20 kms from the old station and of transfer within the same city, one third of the composite transfer grant will be admissible, provided a change of residence is actually involved.

The rates will further rise by 25 percent whenever DA increases by 50 percent. The rates for transporting the entitled weight by Steamer will be equal to the prevailing rates prescribed by such transport in ships operated by Shipping Corporation of India. The claim for reimbursement shall be admissible subject to the production of actual receipts/vouchers by the Govt servant. Production of receipts/vouchers is mandatory in r/o transfer cases of North Eastern Region, Andaman & Nicobar Islands and Lakshadweep also.

The general conditions of admissibility of TA on Transfer as prescribed in S.R. 116 will, however, continue to be applicable.

(i)  Travel Entitlements
Travel entitlements as prescribed for tour/transfer in Para 2 above, except for International Travel, will be applicable in case of journeys on retirement. The general conditions of admissibility prescribed in S.R. 147 will, however, continue to be applicable.

(ii) Composite Transfer Grant (CTG)
(a) The Composite Transfer Grant shall be paid at the rate of 80% of the last month’s basic pay in case of those employees, who on retirement, settled down at places other than last station(s) of their duty located at a distance of or more than 20 km. however, in case of settlement to and from the Island territories of Andaman, Nicobar & Lakshadweep, CTG shall be paid at the rate of 100% of last month’s basic pay. Further, NPA and MSP shall not be included as part of basic pay while determining entitlement for CTG. The transfer incidentals and road mileage for journeys between the residence and the railway station/bus stand, etc., at the old and new station, are already subsumed in the composite transfer grant and will not be separately admissible.

(b) As in the case of serving employees, Government servants who, on retirement, settle at the last station of duty itself or within a distance of less than 20 kms may be paid one third of the CTG subject to the condition that a change of residence is actually involved.

(iii)  Transportation of Personal Effects:- Same as Para 3(iii) above.

(iv)  Transportation of Conveyance:- Same as Para 3(iv) above.

The general conditions of admissibility of TA on Retirement as prescribed in S.R. 147 will, however, continue to be applicable.