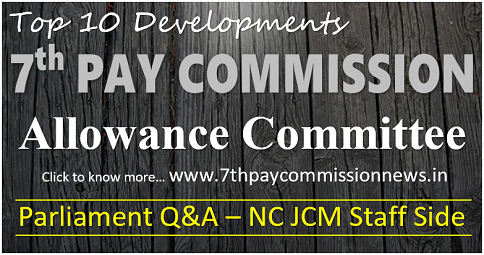 1. 7th CPC Allowance Committee Report – Minister once again replied in Parliament on 22.3.2017
“DoPT Minister replied in Lok Sabha on 22nd March 2017 regarding the status of the Committee on Allowances.”
Read more…

2. Decision on 7th CPC allowances – Deep sense of frustration among employees
“Reports indicate that the Government might take more time to announce its decisions regarding the Ashok Lavasa Committee’s report on allowances that were prescribed by the Seventh Pay Commission”
Read more…

3. Committee on Allowances of 7th CPC – 3rd Reply in Parliament on 24.3.2017
“The Committee has taken more time than was initially prescribed in view of the large number of demands received. The Committee is now in the process of finalizing its Report.”
Read more…

6. NC JCM Staff Side Report on 29.3.2017
"Grievances of the Central Government Employees : “It was being expected that, Committee on Allowances would complete its proceedings within the fixed timeframe and the CGEs would be paid allowances on the revised rates w.e.f. the date of implementation of the 7th CPC report, but unfortunately, it is being delayed inordinately, owing to which there is serious resentment brewing among the CGEs.”
Rad more…

7. NC JCM Staff Side Report on 30.3.2017
Brief of the meeting held with the Cabinet Secretary :  “I met the Cabinet Secretary on 28th March, 2017….”MCD elections may result in some delay, but at the same time, he assured that, as soon as he gets report of the Committee on Allowances, that will immediately be forwarded to the Cabinet, and after approval of the Cabinet, if need be, we would take necessary permission from the Election Commission.”
Read more…