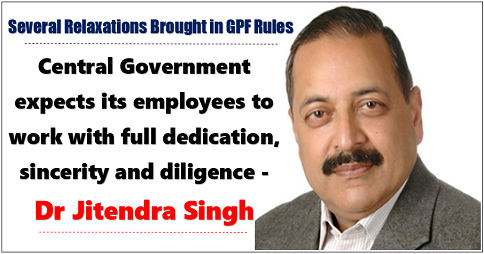 In a major relief for government employees, Ministry of Personnel, Public Grievances and Pensions has announced several relaxations in General Provident Fund Rules, with liberalization and simplification, particularly relating to advances and withdrawals by the subscriber/ employee.

According to the Union Minister of State (Independent Charge) for Development of North Eastern Region (DoNER), MoS PMO, Personnel, Public Grievances, Pensions, Atomic Energy and Space, Dr Jitendra Singh, the existing GP Fund (Central Service) Rules came into force way back in 1960 and even though certain amendments have been made from time to time to address the concerns raised, it was felt to be the need of the hour to bring in some more changes for the convenience of the Government employees. The liberalization in the provisions was essentially meant to bring in ease of procedures, especially for activities like house building, education of children etc., thus making the rules more employee-friendly.

Elaborating further, Dr Jitendra Singh stated that the requirement of documentary proof for withdrawing GP Fund has been done away with. As a result, a simple declaration by the subscriber / employee would suffice henceforth, he added. Similarly, the minimum time limit for sanction and payment of GP Fund withdrawal would not be more than 15 days and in case of an emergency like illness, etc., it could only be 7 days. At the same time, the limit of withdrawal also has been increased following which, now the withdrawal for housing can be up to 90% of the balance at credit and withdrawal for purchase of vehicle / car can be up to 3/4th of the balance at credit.

Considering the importance of education, the definition of education for the purpose of withdrawal of GP Fund has now been widened to include primary, secondary and higher education covering all streams and institutions. Not only this, GP Fund advance can now also be applied for travel and tourism related activities, he said.

Dr Jitendra Singh said, the Government expects its employees to work with full dedication, sincerity and diligence, but at the same time, it is also always seriously considering various means and provisions to provide them with a work-friendly environment and socio-economic stability, so that they may put in their best without any unnecessary distraction.