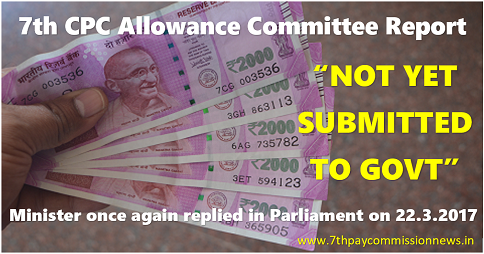 DoPT Minister replied in Lok Sabha on 22nd March 2017 regarding the status of the Committee on Allowances.

“Several representations have been received from various employees’ associations on allowances by the Committee on Allowances. Joint Consultative Machinery (JCM) has also requested to resolve the pending issues including allowances as soon as possible.

To examine the recommendations of the 7th Central Pay Commission on Allowances (other than Dearness Allowance), a Committee of Secretaries under the Chairmanship of Finance Secretary and Secretary, Expenditure has been set up by the Ministry of Finance, Department of Expenditure on 22.07.2016.

Read also:
Allowance Committee not yet submitted its report to Govt – Minister replied in Parliament on 10.3.2017