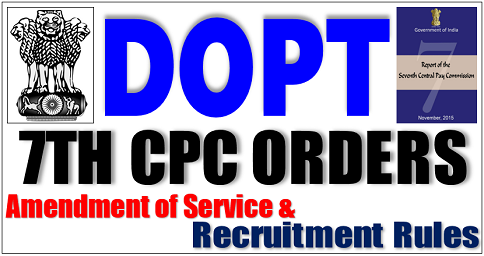 The undersigned is directed to refer to this Department’s OM of even number dated 9th August, 2016 regarding amendment of Service Rules/Recruitment Rules by replacing the existing Pay Band and Grade Pay with the corresponding Level in the Pay Matrix in the revised pay structure recommended by the Seventh CPC and notified in the CCS(Revised Pay) Rules, 2016.

2. Subsequently, this Department held meetings in October/November, 2016 with the administrative Ministries/Departments to review the progress in the implementation of the OM. An important suggestion made in the meetings was with respect to facilitating the process of consultation with the Legislative Department for drafting notification for amendment of RRs in accordance with OM dated 9th August, 2016 and its Hindi translation so as to expedite the issue of notification. In this regard, this Department in consultation with Legislative Department has prepared a model notification in English and Hindi for use of the Administrative Ministries/Departments. These are annexed at Annexure I and Annexure II.

3. Another issue which came up in the meeting is with respect to retention of standard Note under Co1.11 incorporated in the Schedule of the RRs regarding the regulation of service rendered prior to implementation of 6 thCPC, in those cases where the issue of upgradation/merger of the posts were involved. The relevant Note reads as follows:

“Note: For the purpose of computing minimum qualifying service for promotion, the service rendered on a regular basis by an officer prior to 1.1.2006/the date from which the revised pay structure based on the 6th CPC recommendations has been extended, shall be deemed to be service rendered in the corresponding grade pay/pay scale extended based on the recommendations of the Commission. ”  and/or

“Note: For purposes of appointment on deputation/ absorption basis, the service rendered on a regular basis by an officer prior to 1.1.2006/the date from which the revised pay structure based on the 6th CPC recommendations has been extended, shall be deemed to be service rendered in the corresponding grade pay/pay scale extended based on the recommendations of the Commission except where there has been merger of more than one pre-revised scale of pay into one grade with a common grade pay/pay scale, and where this benefit will extend only for the post(s) for which that grade pay/pay scale is the normal replacement grade without any upgradation.”

4. After the implementation of 7 th CPC, there are only a few cases of merger/upgradation of pay scale. It has been decided in consultation with UPSC that in cases where merger/ upgradation of pay are not involved in the recommendations of the 7 thCPC, the Note as referred above is not to be prescribed in the RRs/SRs. The guidelines in this regard have also been separately issued. The model notification includes a provision for deletion of the Note.

6. This Department is monitoring the implementation of the OM dated 09.08.2016. All Ministries / Departments are therefore requested to furnish information as per Annexure-III at the earliest.