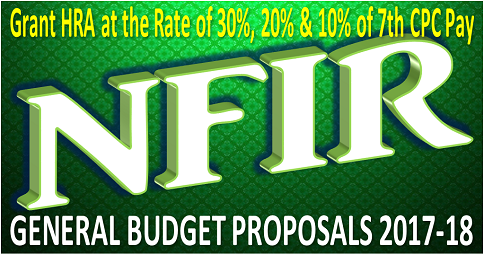 The National Federation of Indian Railwaymen (NFIR) requests the Hon’ble Finance Minister to consider its proposals listed below for inclusion in the General Budget 2017-18 to be presented in Parliament in February, 2017.

2. The Income Tax exemption limit for senior citizens may be raised to Rs.7.5 lakhs and for those Senior Citizens above 75 years age, the exemption be allowed up to Rs.10 lakhs.

3. Transport Allowance presently paid to the Central Government Employees may be exempted from the purview of Income Tax.

4. Fixed Medical Allowance to the retired Central Government Employees may be revised to not less than Rs.2,000/- Per month.

5. Grant House Rent Allowance at the rate of 30%, 20% & 10% of 7th CPC Pay to the Central Government Employees working at Cities/Towns classified as ‘X’ ‘Y’ &’Z’ respectively with back date.

8. Pension parity be granted all those pre 1.1.2016 Pensioners of Central Government.

10. More funds may be provided for construction of new quarters in the Railways and for maintenance of Railway colonies.

11. Training Allowance for Trainers in Railways Training Institules may be enhanced to 30% of pay in lieu of the existing 15%.

12. Separate Rest Rooms for Women Railway Employees at different locations be sanctioned to enable them to stay when they visit on railway duties.

13. Additional Road Mobile Medical Vans may be approved for providing medical treatment to the railway employees and their families living at remote places and jungle stations.