This Department is in receipt of a number of references regarding the procedural difficulties faced by the Government employees in application and settlement of the LTC claims. Sometimes, the Government servants claim that failure to follow the correct procedure was on account of a lack of knowledge of the rules/instructions. It is alleged that in some cases, processing of LTC claims takes unduly long time, particularly when the employee and the sanctioning authorities are located at different stations. 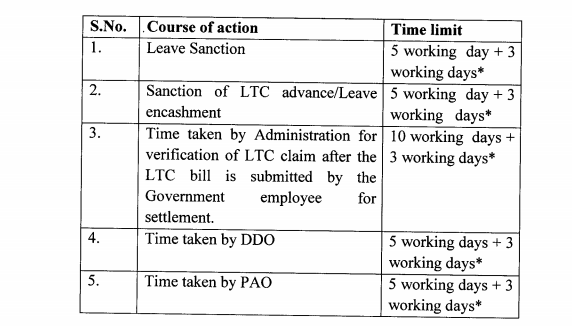 3. Under CCS (LTC) Rules, the Government servants are required to inform their Controlling Officer before the journey(s) on LTC to be undertaken. It has now been decided that the Leave Sanctioning Authority shall obtain a self-certification from the employee regarding the proposed LTC journey. The proforma for self-certification has been annexed with this O.M.

4. In addition to the above, it has been decided that whenever a Government servant applies for LTC, he/she should be provided with a copy of the guidelines (enclosed) which needs to be followed while availing LTC.

5. Employees may be encouraged to share interesting insights and pictures, if any, of the destination he/she visited while availing LTC in an appropriate forum.

sd/-
(Surya Narayan Jha)
Under Secretary of the Government of India