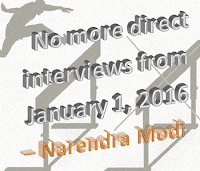 “Cancelling the direct interview process will be of tremendous relief to the poor people who desperately look for recommendations, and will reduce the instances of frauds committed by brokers who promise jobs on payment of money.”

Prime Minister Narendra Modi has announced that the system of direct interviews for the Group B, C and D posts in Central Government offices shall be cancelled from January 1, 2016 onwards. Henceforth, clearing the written round is all it takes for qualifying. Direct interviews shall not be held anymore. The news has brought great relief to job seekers all over the country.

Here are excerpts from the Prime Minister’s Sunday weekly address to the nation, ‘Mann ki Baat,’ on the radio:

Direct interviews encourage irregularities and corruption. The system also leads to the exploitation of the poor by those in power. Money is being looted from the poor in the name of finding jobs for them. Most often, they don’t get the jobs even after paying money.

While pondering over it, I wondered why direct interviews have to be conducted for these recruitments. I have never heard anyone claim that they can completely analyze the behaviour and mindset of a person by simply talking to him or her for a few minutes. Cancelling the process of direct interviews will stop the people of the economically weaker sections from spending huge sums of money for recommendations and bribes to get the jobs. This will save them from the traps of brokers who con them and loot money from them.

V.Krishna Mohan said…
The government’s view is that the interviews should be discontinued for recruitment to junior level posts where personality or skill assessment is not absolutely required. The objective behind abolition of interviews for such posts is that it will curb corruption, ensure more objective selection in a transparent manner and substantially ease the problems of the poor and resourceless aspirants.

Several Group ‘B’ (Non-Gazetted) and Group ‘C’ (Non-Technical) posts in various Ministries/Departments and other organisations under Central Government have already been identified where the selections can be made through a competitive examination without conducting the interview.

The Chief Ministers of different States have been requested to involve the Public Service Commission and other recruiting agencies in their respective States where interview can be discontinued and selection can be done only through examination to achieve the goal of citizen-centric transparent governance.

For a post for which an interview is not necessary to determine the capability of a candidate, the provision of interview sometimes leads to scope for manipulation, manoeuvrability and corruption. Therefore, barring such posts where an interview would help in testing special capabilities for a particular assignment, abolition of the provision of interview will not only be in larger public interest but would also offer a level playing field for even those of the candidates who lack resources and come from lower socio-economic strata.

A pilot exercise undertaken for three States of Jammu & Kashmir, Maharashtra and Tamil Nadu had proved successful wherein, for the first time, an Induction training programme was introduced for the newly inducted State-level functionaries and the same practice is now being extended to other States as well. DoPT has taken a decision to revise and revisit the pattern and syllabus of IAS and other Civil Services Exam to offer a level playing opportunity for aspirants from different streams.
October 27, 2015 at 7:16 PM

Digambar padhee said…
The "No Interview" concept is mired with the following facts.

(1) The said corruption would shift from the Interview level to the School or Board level since candidates would like to have an improved marks in Board Examination by any means. Noteworthy to mention that there are similar human beings at all levels.
(2) Scoring of marks in different Boards are different. Marks in CBSE or ICSE can not be compared to State Board exams. Further, scoring of marks in different state Boards is also different. Students of liberal Boards would get advantage ahead of students of Boards with a strict approach.

Suggestion...... Having common exams for posts of equal level and keep candidates empanelled and post them according to need is a better way to minimise hardship to the candidates as well to the administration.
October 27, 2015 at 8:24 PM

Anonymous said…
But also please see that no one climb the windows during exams too otherwise people from particular locality may benefit
October 27, 2015 at 9:08 PM

Unknown said…
Good Move by PM Narendra Modi. Hats off to him for taking this great decision which would discourage corrouption & recomendations.
October 28, 2015 at 11:06 AM