Will the 7th CPC fulfil the demands of LDCs and UDCs?

Will the 7th CPC fulfil the demands of LDCs and UDCs?

For a number of years now, especially after the 6th CPC, the problems faced by LDCs and UDCs have started gaining prominence. The unity and sense of purpose among them makes them look all set for the kind of victory that Pharmacists had. Common sense of purpose, unity and dedication sure make success possible!

In order to decrease the number of grades, the 6th Pay Commission combined all the different grades between Grade Pay 1300 to Grade Pay 1800 into a single grade – Grade Pay 1800, thereby wiping out the entire Group ‘D’. As a result, everybody became Group ‘C’ employees. Even those who lacked the minimum education levels, illiterates and everybody else were lumped into Group ‘C’. Their Grade Pay was also raised to Rs. 1800. But, at the same time, employees working as LDCs, who have a minimum educational qualification of Class XII and also possess some technical education, were not given any upgrading. Instead, they now had to share their grade with lesser-qualified former Grade ‘D’ employees.


The next huge trouble originated from the MACP. Those who didn’t get any promotion for years are given career upgradations through MACP. LDCs who didn’t get any promotions for more than 10 years were given their next grade pay, from Rs. 1900, their pay rose to Rs. 2000. The increase of mere Rs. 100 turned out to be a huge disappointment to many. Similarly, those with Grade Pay 2400 were hoping for a jump to Grade Pay 4200, but were instead forced to upgrade with only Grade Pay 2800 as per MACP rules. That anger kept seething too, because the different is 1400.

The most important demand of the LDCs and UDCs is to upgrade the current Pay Scale-Grade Pay.

The big question is – will the 7th CPC grant this demand? 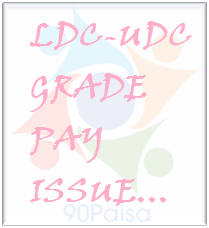 Read our exclusive articles about Expected DA and 7th CPC...

WILL AIR TRAVEL CONTINUE FOR NEXT 2 YEARS..?

DEMAND TO INCREASE HRA MUST GET STRONGER..!

Anonymous said…
Sir, The employees of LDC are +2 OK, what about the employees working in various department holding Graduate geting GP as Rs 1800 so I request the 7th Pay Commission to upgrade the Grade pay as per the Qualification & work.
Gowthaman - Chennai.
May 21, 2014 at 11:46 AM

Anonymous said…
Sir, the work of LDC/UDC in various department same like Assistant, but their grade pay is very Minimum. If he work awarded higher grade may kindly be increased their grade pay.
June 4, 2014 at 4:54 PM

Anonymous said…
Sir please grand the grade pay of Rs.2400 to LDC and Rs.2800 for UDC before implementation of 7th CPC considering their Work Load.

Anonymous said…
The issue on the upgradation of LDC&UDC has been kept in cold storage for long.Ifyou have any news of the same in 7th Pay Commission, please share. I wonder why the government had not taken any action on this very reasonable demand of its employees. Nothing has been heard regarding the Court Cases filed at at the CAT, Delhi and other places. Please update and revive the issue before the submission of the 7th Pay Com.report.
August 19, 2015 at 12:39 PM