The sheer pace of the 7th CPC has impressed the central Government employees so much that their expectations have started to grow.

It has come to our knowledge that a number of unions and associations are seriously involved in filling up the questionnaires prepared and sent by the 7th CPC. It is also well known that on behalf of the National Council JCM Staff Side, the questionnaire had already been filled with the approval of all members and has been sent. (Click here to view the reply)

There is no uniform pay scale or promotion hierarchy for the Central Government employees. The departments functioning under each Ministry are evaluated separately. Promotions and pay scales are decided based on the post/category of the employees in each of those departments. Based on these segregations, the employee unions/associations of each department are preparing their Memorandums containing their demands and issues.

Various unions and associations of each of these departments are currently preparing their own memorandums to send to the 7th CPC. These memorandums also contain their long-standing demands and expectations.

It can be inferred that these memorandums, prepared by various associations of employees starting with Group ‘C’, right up to the Gazetted Officers Association, reflect their thoughts and demands.

Pensioners Associations are also participating in this in large numbers. It shows the fact that they believe that their requirements will be fulfilled by this Pay Commission.

The 7th Pay Commission is offering this rare opportunity that was not given in the previous Pay Commissions. Each issue has a number of different perspectives. This could lead to a consensus-based decision that appeases all. It is a healthy trend to watch so many people vying with each other to present their opinions and suggestions.

There is special curiosity and eagerness to read the Memorandums of some of the important Central Government and railway employee federations.

Given below are the links to some of the most prominent Central Government employee unions and associations:

Read our exclusive articles...(Click the title and read continue...)

EXPECTED PAY SCALE OF 7TH CPC
EXPECTED 7TH CPC PAY SCALE :-7th CPC Pay Scale is fast becoming the most mesmerizing phrase among Central Government employees these days. Every Central Govt Employee is waiting to find out the changes in their pay scale that the 7th CPC would recommend to the pay structure...

The decision, to not confine itself to just the opinions of the Central Government officials and various employees federations and instead gather feedback from all employees, is a very appreciable one. Intends to Gather Suggestions via Web Survey: The 7th Pay Commission is all set to utilize the power of the internet...

The National Mazdoor Conference has urged the Chairman of the newly formed 7th Pay Commission recommend that 20% interim relief be given to all Central and State Government employees. As per Newspapers report that the NMC has also strongly demanded that these recommendations be submitted to the new government...

100% D.A from January 2014 – Some Allowances and Advances Rise by 25%. The National Mazdoor Conference has urged the Chairman of the newly formed 7th Pay Commission recommend that 20% interim relief be given to all Central and State Government employees.

ACP - MACP NEXT..?
5th CPC had ACP, 6th CPC had MACP; what does 7th CPC have..? Assured Career Progression (ACP) is a boon to employees who have been suffering without promotions for years. Employees who got their jobs towards the end of 1960s had to face countless hurdles. One of them was the problem with promotions.

EXTENSION OF AIR TRAVEL ON LTC...?
LTC-Will Air Travel Continue for the Next 2 Years?  These concessions were initially announced for only two years and then extended to 2013. Each BLOCK YEAR can be carried forward to one year, i.e., those who haven’t utilized the facility in 2012-13 BLOCK YEAR can avail of it until December 2014.

EXPECTED DA FROM JULY 2014
Expected DA- Status, as of March 2014 : Expected Dearness Allowance from July 2014 : This time there is a considerable slackening in the pace of the expected DA. It looks as if there are plenty of reasons for it. As of March, the AICPIN has increased by one point and is at 239. The rapid increase in Consumer Price Index (IW)...

WILL 7TH CPC FULFIL THE DEMANDS OF LDCs AND UDCs
For a number of years now, especially after the 6th CPC, the problems faced by LDCs and UDCs have started gaining prominence. The unity and sense of purpose among them makes them look all set for the kind of victory that Pharmacists had. Common sense of purpose, unity and dedication sure make success possible! 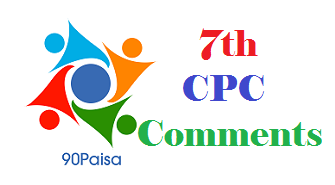