On 28.02.2014, the Cabinet Committee announced that it had given its consent to 10% Additional Dearness Allowance to all Central Govt Employees and Pensioners with effect from 1.1.2014.

This took Dearness Allowance to 100%.

Now, Central Government employees will be given 100% Dearness Allowance from the preceding date of 01.01.2014. But the Finance Ministry has not issued any relevant orders yet. We are hoping that the orders will be given before the end of this month.

In the current scenario, the Dearness Allowance is equal to Basic Pay.

Let us look at the Dearness Allowance trends in the past…

Click to view the image given below - Finance Ministry order… 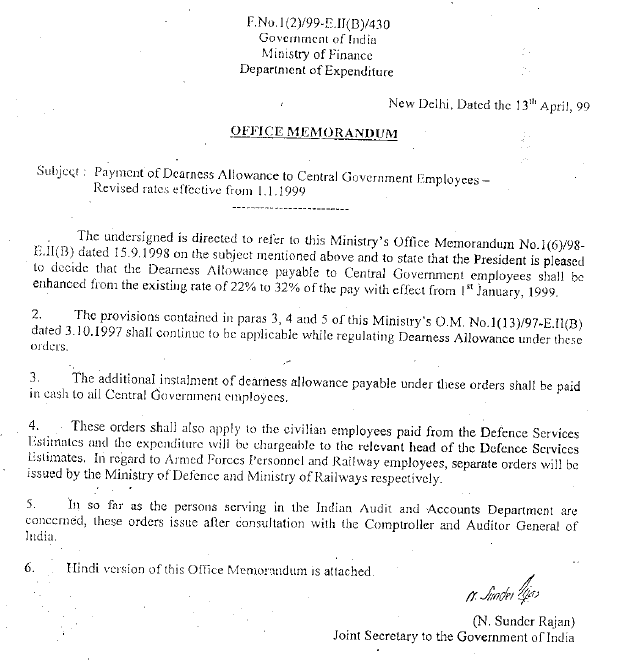 Anonymous said…
Merger of 50% DA with Basic and enhencement of retiredment age from 60 to 62 yrs demand were genuine. It is unfortunate decision for CGE.
February 28, 2014 at 8:17 PM

kedy said…
can any body tell me why DA is taxable ? where as this is announced to compensate the value of Rupees.
March 3, 2014 at 9:34 PM

Unknown said…
WHAT IS NEW IN THIS MATTER. Some media and others are praising as a mercy gesture from the Government. What gesture they have made. As per the instant Rules and Regulations they are sanctioning it.They are bound to do it. If they are not doing it, there may be valid reasons. Now they had done earlier. But the order will take effect only after March 2014. Don't make it as a impossible matter done by somebody. Rajendran Pillai.
March 4, 2014 at 5:04 PM

suresh,77 daak colony, jaipur said…
why this demand is not being raised by the confederation of CGE that DA is due to calculated CP index and for compensation of increased rate of commodities.hence DA should not included in income of salary paid employees.
March 4, 2014 at 10:14 PM

Anonymous said…
will children education allowance, nursing allowance, uniform allowance and washing allowance increase 25% as DA increased by 50% and reached 100%.
March 8, 2014 at 11:10 AM

Anand Bansal said…
Anyone in the know of things please tell as to what is the delay in issue of DA increase order by finance ministry? Whereas the enhanced allowances like CEA, HRA etc can be claimed wef 1.1.2014, the delay in issue is depriving the employees of enhanced daily allowance while on tour.
March 17, 2014 at 7:58 PM